AMARC Stands in Solidarity with Ayotzinapa 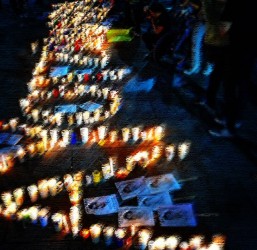 5 November  2014. During its latest session, held in Rome, Italy, on the 27 and 28 of October 2014, the International Board of the World Association of Community Radio Broadcasters (AMARC) passed a resolution urging the Mexican government to investigate the disappearance of 43 students from the rural Normal Raúl Isidro Burgos community in Ayotzinapa, Guerrero. AMARC feels the anguish of their parents and stands with those seeking the safe return of the children.

Furthermore, AMARC deems it necessary that justice be served for those who were murdered as a result of the September 26th shootings in the City of Iguala, Guerrero.

AMARC considers Mexico’s lack of action in the disappearance of the children to be completely out of the parameters of democracy that Mexico strives to represent internationally.  For a country to be considered democratic and respectful of human rights, it must first safeguard these rights for its citizens. AMARC requests that the government of Enrique Peña Nieto ensure the realization of human rights, including the right to free speech, for the Mexican population.