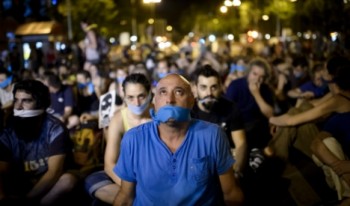 The latest International Press Institute (IPI) country report has found “evident dangers for the free flow of information” in the Spanish state. It has also highlighted that the lack of implementation of the 2010 Audio-visual Law provisions on the regulation of community radio is a threat to citizens right to communicate.

“IPI is troubled by the Spanish government’s refusal to comply with the requirement to develop a regulatory framework for community media. This inaction manifestly violates the right of community media to operate as a part of a pluralistic media environment as clearly established by the 2010 Broadcasting Act.”

Further more, the IPI report points out the dangers posed by the controversial public security legislation, such as the “Gag Act” o “Ley Mordaza”. “Among other things, the law punishes the unauthorised use of images of police officers, as well as the failure to show due respect toward the police, with hefty fines. The measure had become a lightning rod from the moment it was first announced, as it was put forward in the midst of an unprecedented wave of public protests in Spain, many of which were a response to the current government’s austerity programme, and which have involved clashes between police and demonstrators as well as, in some cases, instances of alleged police aggression against journalists. While the Popular Party has characterised the law as necessary to protect public order and prevent violence, it is waging a lonely battle in the court of national and international public opinion,” warns the report.

The IPI has also called the Spanish government to restore independence of the country’s public broadcaster. “In April 2012, just five months after taking power, the current government issued an executive decree scrapping the requirement for a two-thirds parliamentary majority when appointing members of the Spanish public broadcaster’s executive board. The new procedure allowing for appointment by absolute majority allows the governing party undue influence over the board’s composition and, by extension, key editorial positions. Since the change, RTVE has been besieged with accusations of bias and manipulation of news coverage, leading to a complaint before the European Parliament in April 2015.”

Further more, the report denounces the lack of an independent regulatory body, as “in 2013, the Popular Party-controlled Parliament passed a law throwing out a key achievement of Spain’s 2010 General Broadcasting Act: the creation of an independent, sector-specific broadcast regulator, something Spain had previously lacked. The 2013 law rolled the broadcast regulator’s functions into a “superregulator” – with additional competencies over airports, railroads, the postal service and the energy market – whose 10 members are directly appointed by the government without consultation from Parliament.”

Joining the International Press Institute (IPI) in issuing the recommendations were the Committee to Protect Journalists (CPJ), the European Federation of Journalists (EFJ) and the Madrid-basedPlatform in Defence of Free Expression (PDLI).