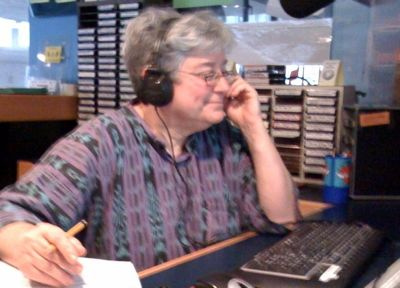 Women´s UN Report Network – Frieda Werden attended the UN World Conferences on Women in 1975 and 1995.  She has worked as a volunteer and professionally in public and community radio in the US and Canada since 1973. In 1986, she co-founded WINGS: Women’s International News Gathering Service; as its series producer, she internationally syndicates a weekly half-hour radio program by and about women around the world. WINGS has been honoured by the US National Federation of Community Broadcasters and Canada’s National Campus and Community Radio Association.  Werden has served as North America Women’s Representative and then N.A. Vice President of the World Association of Community Radio Broadcasters (AMARC), and President of the International Association of Women in Radio and TV.

When I was a girl, it was said that the three most important means of communication were “Telephone, telegraph, and tell a woman.”

Ever since the ’70s, we’ve had a lot of basically internal women’s movement publications and websites.  And once in a while an American football player punches out his fiancee in front of a video camera and domestic violence goes viral as an issue. Or, you raise more than a million dollars to have a women’s press room at the UN World Conference on Human Rights in Vienna.  That was a media breakthrough in 1994, after 20-plus years of public denials about violence against women….  But where is the day in day out discussion with the public about women’s issues?  Where can you get public space for that without paying a fortune or kowtowing to advertisers?

Radio!  Community and campus radio, is what I’ve found.

Community radio is a worldwide movement committed to getting under-covered voices and ideas onto the air. Women have a major role in it, including international and regional women’s networks. The World Association of Community Radio Broadcasters has lobbied for decades to get licensing frameworks adopted, country by country.  Community radio is big and getting bigger across the US, Canada and Latin America.  In 17 countries of Europe it’s legal now, and the Community Media Forum Europe is lobbying for its full recognition as part of the “third sector.” It’s madly successful across Africa, especially since the World Summit on the Information Society in Geneva, where donors got on board.  …Community radio was finally re-legalized in the UK a few years back, quickly leading India to legalize. Community radio has been saving lives in Nepal, former Yugoslavia, Haiti…. It’s in Jordan and at long last in Tunisia.

And you can quite probably walk into a station in your own town or call them up and say – “we have an issue we want to talk about on the air.”  Start by being a guest.  Then ask for a regular program. Maybe they have a women’s collective or department you can join –, or maybe you’ll want to start one.

You can access the station’s audience and bring your supporters to the station as audience.  You can get free training to use the simple equipment for one or all of your group, and later advanced training to make fancy programs if you like. You can broadcast grassroots or expert interviews, round-table discussions, recordings of speeches, live coverage from rallies… anything with sound.

And for women, the kicker is : the audience has to listen to you instead of judging how you look.  You can even be anonymous.

Some people like to put down community radio.  They say “ah, you’re only preaching to the converted.”  Well, If you don’t preach to the converted, they don’t stay converted long.  Why do you think there’s church every Sunday? And with radio there’s a reach-out factor – people turn on the dial, and – “what’s this? Interesting!”  Or, to be fair, they might say “Not interesting!”  When you’re part of the media it’s part of your challenge to learn, stay creative, and make it interesting!

You think, Why not just write something on the internet?

There’s something about the human voice that says more, much more, than mere words.  Your warmth, your guests’ passion, the music of the language can be more convincing than any essay.

Besides, bringing other people into an in-person conversation – listening to them, privileging their voices – that builds alliances.  It builds community.  And it builds audience.

Why not just put your audio on the internet?

Despite the hype, not many people listen to podcasts compared to radio.  While big commercial radio is going down, local radio listening is up. A recent North America survey showed even people who do listen to podcasts listen to the radio even more.  And being on the radio schedule is like having a great google ranking – people know you are there.

I could exhort you all day, but let’s move on to section J [The Media section of the Beijing Declaration and Platform for Action, unanimously adopted by participating countries in 1995 at the UN’s 4th World Conference on Women] – what’s in it for the community radio sector?

Here’s a quote: “Everywhere, the potential exists for the media to make a far greater contribution to the advancement of women.”   There are women’s radio stations (one in Oslo and one in Kampala, for example); but I’ve yet to find a community station in North America with more than 35% women on the air. By world standards, that’s not bad, but let’s try harder to take up our share of space.  Funders could help by supporting women’s-program coordinators.  Often women choose to work collaboratively instead of hosting a one-ego show; and a paid coordinator vastly extends the life of such collaborations.

Another quote: “Women should be empowered by enhancing their skills, knowledge, and access to information technology.”  Your government’s licensing of community radio stations has opened that door for you already. Step through it.  Most commercial and public broadcasters today still get their start from community radio.   Community media also are leaders in adapting to new technologies – you can learn from them.

Paragraph 240 calls for media systems to include women in developing regulatory mechanisms.  In Canada and at the international level, community  radio organizations require 50% of directors be women.  These directors develop interventions with regulators – you can take part through them.

Section J objectives with respect to content can be pursued  through community radio – plus, events you develop for radio can be tweeted, facebooked, photographed, videoed, turned into print documents, and splashed all over the internet. Many shows are doing that today.

Down near the bottom of section J, all three sectors– media, governments, and NGOs –are enjoined to “support the development of, and finance, as appropriate, alternative media and the use of all means of communication to disseminate information to and about women and their concerns.”

There are a few ways I see government and commercial media supporting community radio as alternative media, but also I see supports being threatened or actually removed.  If you become part of this media, you’ll have a stake in these issues and follow them.

To wrap up: I’ve been working with community and public media since 1973, and syndicating a half-hour weekly radio program by and about the global women’s movement for 28 years.  It’s my experience that  community radio is where the openness to women’s issues and voices tends to be greatest, and I would be extremely happy to see many more women move in on that openness. .

We find in this world that it can be a quick business to destroy livelihoods and cultures, creating traumas that ring down through generations. The much harder job is to heal, and that requires building relations in community.

Birgitte Jallov of Denmark has helped build community radios in Africa for decades, and measures their impact.  She told me in an interview that the number one change people attributed to the radio in all communities she studied was: “Women are being beaten up less…  We’re being beaten up less.”  Privileging women’s voices, ideas, skills, and solidarity has done that.  It’s my hope you will adopt community radio as your own and do the same.