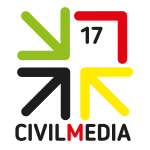 AMARC board member and WIN representative Xenia Helms attended the 8th Edition of Civilmedia17: UnConference for Community Media & Civil Society and #mediana-Konferenz taking place from 15-17 June in Salzburg, Austria. The almost exclusively German speaking event under the title “Mach mit, mach’s nach, mach’s besser” attracted around 150 radio enthusiasts and professionals from about 11 Countries, including the countries of origin of the refugee participants. The three-day-conference comprised of 33 workshops, lectures and gatherings.

On Day 1, Civilmedia17 was focussing on the media work of migrants and refugees under the claim of “Voices of Inclusion”, while natives at the same time were taking on offers of in-house education, internal exchange on station and editorial level as well as exploring ways of to connect and network. Day 2 ended with the Civilmedia Award Show & Party, awarding four Austrian community media productions in the categories „Access & Empowerment“ and „Entertainment & Arts“, chosen by a jury out of 20 short-listed contributions from 100 submissions in total.

Through panels and workshops the participants discussed the working and social-political conditions as well as ways to expand and improve existing structures for free and community media in Austria. Xenia Helms participated in several formats that covered topics ranging from gender mainstreaming and diversity and the age gap to networking and interdisciplinary approaches. The panel discussion “Freie Radios – mehr als alte weiße Männer?!” attracted a wide spectrum of the participants, including old white males. Sad to say, many interested and affected non-German speakers, such as Indian UNESCO chairman Vinod Paravala, Kenian radio researcher Rose Kermani or Serbian Balkan Radio Network-founder Vladimir Radinovic and most of the refugee participants of “Voices of Inclusion” were excluded from most content despite the urgent request by Helms to offer whispering interpretation from German to English, which could not be organized by the conference hosts in Salzburg. Questionable is also the success of the concept of unconference which according to the organisers meant “the meeting is open for proposals” since most slots presented a rather conventional content that seemed not to vary much from the extensive workshop activities at Austrian free radios and community TV.