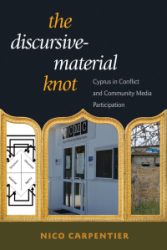 Innumerous scholars—Cypriots and non-Cypriots alike—have taken on the study of the Cyprus conflict and the attempts of its transformation into a more peaceful and nonmilitarized situation. But never before has an extensive study been conducted on the role of Cypriot community media—and in particular of the Cyprus Community Media Centre (CCMC)—in conflict transformation.

The main argument of this study, though, is that there is a natural alignment between these two elements—between participation and peace-building. CCMC and MYCYradio, as a participatory assemblage, plays an important role in peace-building because it is a community media organization, radically committed to maximizing participation. This commitment to participation, for instance, produces high levels of inclusivity, supported by principles of equality and respect for diversity. It allows for the creation of an alternative community of ordinary people outside the logic of antagonistic nationalisms and for alternative (horizontal) structures that facilitate collaboration, and for the deployment of multi-layered forms of citizenship and networks of like-minded civil society organizations.

More information about the book can be found here:
https://nicocarpentier.net/dmk/
and
https://www.peterlang.com/view/product/31239?format=PBK