AMARC launches a worldwide campaign for the safety of journalists

According to UNESCO, 96% of crimes against freedom of expression affect local commercial or community media. In order to strengthen efforts to reduce the level of impunity for crimes against freedom of expression, World Association of Community Radio Broadcasters (AMARC) launches an international broadcast campaign of radio programmes highlighting the work of journalists / producers of community radio to coincide with the World Day against Impunity for Crimes against Journalists (November 2, 2016). The programme is part of AMARC Global Campaign and is being is organised in partnership with and support of International Network for Freedom of Expression (IFEX).

With this campaign, AMARC aims to alert a broad international audience on the importance of ending impunity and ensure the safety of journalists, many of them working in local and community media. AMARC also wants to increase the pressure on government officials to stop impunity and educate the public about the importance of their role in preserving a safe working environment for journalists. This advocacy from the membership, associates and allies of AMARC will be reinforced with the pressure of the audience of the participating community radio stations.

This is a chance for your radio station to participate in this global campaign! We invite your station to produce a radio programme on the theme and leave a mark on the fight for freedom of expression. The radio programme must fulfill the following criteria:

Selected radio programmes that fulfil the above criteria will get 100 € towards programme support. To learn more about the programme and how to participate in this campaign please visit:  https://www.amarc.org/noimpunity 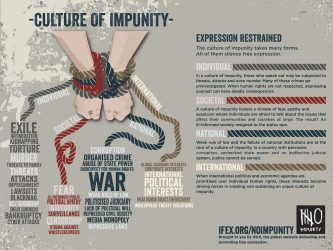 We look forward to your active participation in making this campaign a success. For more information, please contact the campaign manager Igor Zmitek Prosic: prosic.igor@gmail.com

Through its members, networking and project implementation, the World Association of Community Radio Broadcasters – AMARC, brings together more than 4,000 community radios, community media federations and activists in more than 130 countries. Follow us on Twitter / Join us on Facebook / Listen to us on Soundcloud