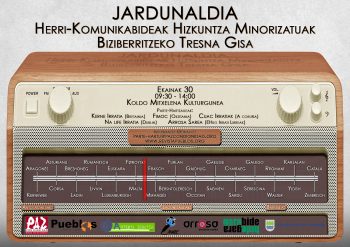 blos – Bakea eta Duintasuna Elkarteak (Association for Peace and Dignity), Radio Antxeta Irratia and Arrosa Sarea (Network of Basque Free Radios), has organised the meeting called “Minority Languages and Free Radios” from the 28th to the 30th of June.

This is a follow up to an initial AMARC Europe meeting held in the European Parliament in Brussels in October 2013. This initial meeting was organised by AMARC Europe and former MEP Iñaki Irazabalbeitia (EFA Group) The objective of the forum has been to provide an overview of the role of community media in the cultural preservation and promotion of minority languages and to further best practices exchanges between media experiences of the third sector. This first gathering was followed up by a presentation  to the Intergroup for Traditional Minorities, National Communities and Languages that took take place on Thursday 16 January 2014 in Strasbourg. With this new initiatives we want to encourage the collaboration between those Free Radios that work to revitalase Minority languages in Europe, with the following objectives:

Apart from the “official” meeting agenda, some of the attendees are planning an informal meeting on the afternoon of Friday 30th June to discuss future lines of work in AMARC concerning minority language. For more information, contact Eneko Calle of Bakea ta duintasuna.

TALK: “Gaelic and Basque in the waves”

CONFERENCE: “Local media as a tool to revitalise minority languages”.

– Arantza Gutierrez Paz, teacher in the Audio visual Comunnication and Publicity department of the University of the Basque Country (EHU).