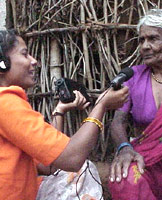 The South Asia Network for Community Media (SANCOM) was formally launched on February 13, 2015 at the World Radio Day event in New Delhi, India, organized jointly by UNESCO and the Commonwealth Educational Media Centre in Asia (CEMCA).

Launching the virtual network of SANCOM (https://www.sancomonline.net), Mr. Shigeru Aoyagi, the Director and UNESCO Representative to Bhutan, India, Maldives and Sri Lanka, expressed his happiness about the formation of the regional network and emphasized the importance of such groupings to promote media pluralism and diversity in South Asia. Prof. Vinod Pavarala, UNESCO Chair on Community Media and Member-Convener of SANCOM, explained the broad objectives of the network during his presentation. He explained that in fulfilling its’ objectives, SANCOM would respond to challenges and issues as and when they emerge with smaller interest groups tending to them from time to time.

The foundation for SANCOM was created on July 12, 2014 at a Roundtable on ‘Towards a South Asia Network for Community Media’ at the University of Hyderabad, India. The twenty-five attendees, representing different countries in the region, discussed the need for such a network, what it can do, how it will function and who can join. This resulted in a Steering Committee, comprising sixteen individuals, being formed to take the initiative forward.

The attendees agreed on seven objectives for the network. Firstly, SANCOM would advocate for a more free and open policy environment for community media to flourish in the region. Secondly, the network would exchange information regarding community media related initiatives and activities in the region. Thirdly, SANCOM would foster the building/sharing of capacities for community media production and management across national boundaries. Fourthly, it would document and disseminate best practices and explore possibilities of replicating success stories. Fifthly, SANCOM hopes to encourage comparative research that could help gain greater awareness and deeper understanding of community media in different national contexts in the region. Sixthly, the initiative will promote peer learning and self-evaluation. Lastly, SANCOM will build alliances with other national, regional and global networks, both of community media as well as of broader social movements.

Currently, the eight SAARC countries (Afghanistan, Bangladesh, Bhutan, India, The Maldives, Nepal, Pakistan and Sri Lanka) would be involved with the SANCOM initiative.