31 December 2014. Just one day after International Human Rights Day, 10 December, the #LeyMordaza (Gag Law) has been approved in Spain which essentially legalises human rights abuses and penalises media coverage that might uncover abusive police behaviour. Under the new law, the production and distribution of images such as the one below can get you a 30.000€ fine.

Spanish Congress approved the restrictive Citizen Safety Law or ‘Gag Law’ today, which now goes to the Senate for final approval. All parliamentary groups except the Partido Popular (PP) oppose the law but as PP holds the majority in both the Spanish Congress and Senate, the law is expected to pass with flying colours.

Some of the most controversial aspects of the Ley Mordaza include:

7. For presence at an occupied space (not only social centers but also houses occupied by evicted families) – 100 to 600€ fine.

8. Police black lists for protesters, activists and alternative press have been legalised.

10. Appealing the fines in court requires the payment of judicial costs, whose amount depends on the fine.

11. It allows random identity checks, allowing for racial profiling of immigrants and minorities.

12. Police can now carry out raids at their discretion, without the need for “order” to have been disrupted.

14. The government can prohibit any protest at will, if it feels “order” will be disrupted.

15. Any ill-defined “critical infrastructure” is now considered a forbidden zone for public gatherings if it might affect their functioning.

16. There are also fines for people who climb buildings and monuments without permission. (This has been a common method of protest from organizations like Greenpeace.)

In what seems like a return to Franco’s dictatorship, activists and human rights defenders criticise the new law as it gives overwhelming power and impunity opportunity to police. Amnesty International spokesperson Maria Serrano, says the law also deprives migrants of the right to asylum and eliminates guarantees that migrants could have the right to counsel. Spanish opposition parties strongly opposed the law and staged a protest with gags in response.

On 20 December, thousands of people gathered in several Spanish cities to protest against this ‘Gag Law’ with the largest protests taking place in Barcelona, Bilbao and Madrid; others were held in cities including Almeria, Granada and Valencia. 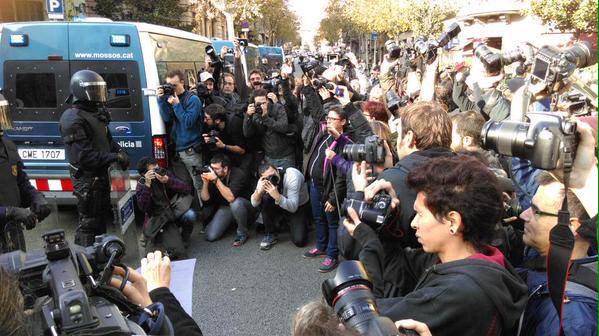 Photojournos in Barcelona to protest to law that prohibits photographing the police.

The prime minister, Mariano Rajoy, said the law was not meant to gag citizens but protect them. “One of the obligations of the government is to guarantee the liberty and security of all of its citizens,” he said.

But Joan Coscubiel, a spokesperson for the Izquierda Plural group in parliament, called the law a “kick in the teeth for democracy”.

The proposed law has outraged activists. “It’s an attack on one of the pillars of our democracy,” said Stéphane Grueso, a Madrid-based activist and blogger.

Previously, he said, actions such as demonstrating outside the homes and offices of public figures would land protesters in court, defending their actions in front of a judge. But this legislation would automatically deem certain tactics to be outside of the law.

“It worries me how the government has decided, all of a sudden, that they didn’t need judges and that they could solve everything themselves,” Grueso said.

Manuel Ballbé, a law professor at the Autonomous University of Barcelona, said the legislation was less about cracking down on demonstrators and more about winning votes for the conservative government.

“They need to radicalise these movements, to create a climate of violence. Then the government can come out and show that they are the best party to institute law and order,” he said. “Despite the crisis, there hasn’t been any increase in crimes or violence. With six million unemployed and half of our youth unemployed, there’s been no rise in delinquency.”

The anti-eviction leader Ada Colau called on her nearly 100,000 Twitter followers to stage a day of general disobedience if the law is passed. Her group, the Mortgage Victims’ Platform, added their own message aimed at those promoting the law: “We’re not scared. We know the power that we the people have.”

Our colleagues of Radio Corax, in Germany, interviewed Miriam Meda, former president of Spanish Community Media Federation ReMC and current Secretary General of AMARC Europe. You can listen to the interview here.